Net metering is a simple concept that’s policy in 43 states. It’s like rollover minutes on a cell phone bill — it lets utility customers who install solar systems feed energy they generate into the grid if they don’t need it at the time they’re generating it. They get the fun of watching their meter run backwards, and they get a  credit on their power bill for that excess energy, which they can use when the sun goes down. The question, though, is what constitutes fair credit, and whether net metering customers are passing on to other customers an unfair burden of transmission and distribution charges.

As you can imagine, perspectives on this issue vary. Some are predictable, others not so much.

Let’s start with utilities, who are on the predictable end of the spectrum. After all, when utility customers generate their own power, those customers end up paying a lot less to the utility. And utilities are set up to make substantial profits from large infrastructure investments. Net metering poses a threat to that business model.

This threat has been getting a lot of attention. One of the most thoughtful writers on the subject, David Roberts, says of utilities’ “path to obsolescence,” “From the utility’s point of view, every kilowatt-hour of rooftop solar looks like a kilowatt-hour of reduced demand for the utility’s product.” And that’s not just any product: because solar panels produce the most at peak rate times, solar reduces demand for a utility’s “most valuable product.”

Where does this end? While Roberts calls it a “vicious, self-reinforcing cycle,” others have used more colorful language, terming it the utility death spiral: As more people go solar, utilities are forced to raise rates on those who don’t. That makes solar even more attractive, and more people opt for solar power. That forces utilities to raise rates even more. Get the picture? In case it’s not clear yet, here’s a nice illustration of the obsolescence of US utilities: 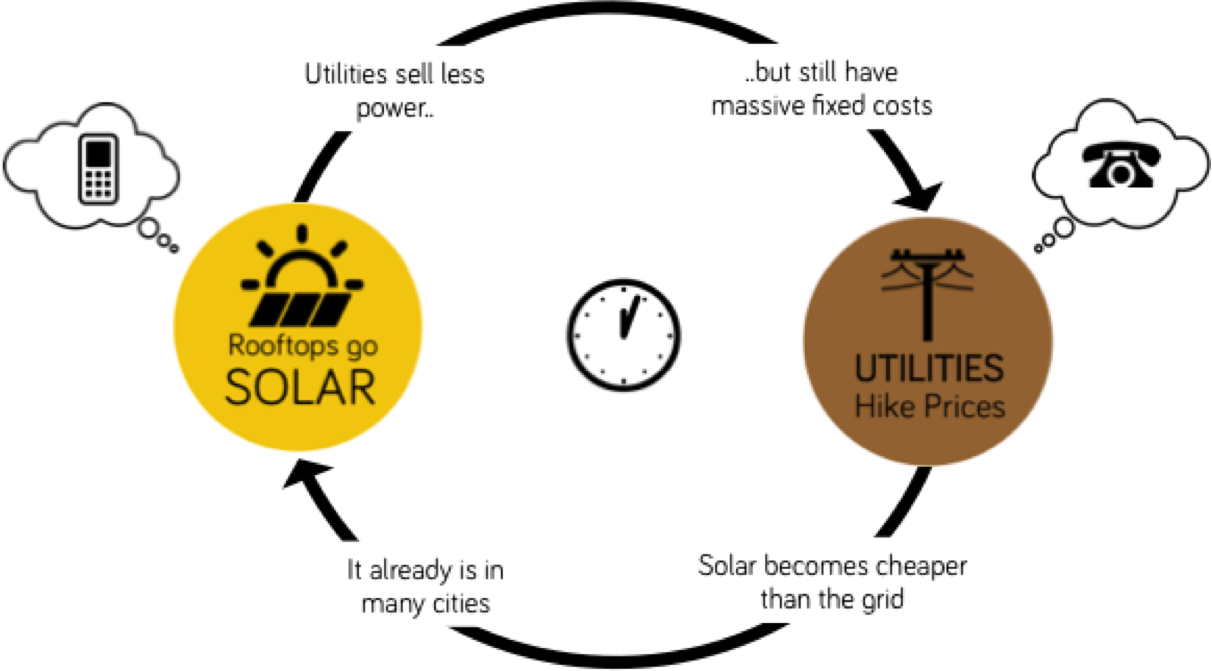 It may seem premature to talk of the death of utilities at a time when rooftop solar still represents less than 1% of US power generation. But the fact that utilities themselves are so worried indicates it’s a threat to be taken seriously. Think about it: Who would have predicted just a decade ago that so many of us would do away with our land lines? We’ve seen serious disruptions in other industries, and the power industry seems due for its own shakeup.

So it’s not surprising that utilities aren’t fans of net metering. Of course, they can’t say that the reason they’re against it is because it eats into their profits. Instead, they use the argument that all customers are subsidizing those who use net metering.

This is a valid concern, and it’s shared by consumer advocacy organizations like The Utility Reform Network (TURN). TURN also points out that in states like California with a tiered-rate system, net-metering customers are not getting equal credits. A customer who uses more power goes into a higher tier and therefore gets a higher credit for the power they generate than a customer who uses less. This particular issue can be addressed by paying all net-metering customers the same price — something that might be in the works in California, where rate design changes are expected.

But the question still remains, What’s a fair price for net-metered energy? Utilities would like it to be the same as the wholesale prices they pay for most of the power they purchase. But according to TURN, it’s only fair for rooftop solar generators to get more than what a utility pays for dirty energy or even for remote large-scale solar, since rooftop solar provides benefits that neither of those can — such as local jobs, reduced need for transmission lines, and increased grid security.

While these are fair concerns, some say that utilities and all their customers are benefitting from net metering. Vote Solar is in that camp. A recent study they commissioned from Crossborder Energy found that the benefits of net metering in California (like savings on investments in infrastructure and on meeting state renewables requirements) outweigh the costs (like the lowered revenue to cover utility infrastructure costs).

The way Vote Solar sees it, net metering has been key to the success of solar in California, which in turn has conferred many benefits on that state — creating thousands of jobs, bringing billions in investments to the state, and saving billions for schools and other public agencies. In addition, it’s helped low- and median-income families reap the benefits of going solar.

So Vote Solar’s position is basically, Why fix what isn’t broken?

Other findings echo Vote Solar’s, including recent studies in Vermont, New York, and Texas — all of which conclude that net metering provides a net benefit to all utility customers. The California Public Utilities Commission is due to publish its own study this year.

But the utilities are likely looking toward a future where net metering will go a fair ways toward breaking their model. So even if Vote Solar is right that they incur a small benefit from net metering now, utilities are not likely to be swayed by a few studies.

Like that of the utilities, Vote Solar’s position is what you’d expect. What you might not expect is the support of Barry Goldwater, Jr., and other Republicans. What better proof that net metering is good for all of us?

Goldwater lives in Arizona, a state with ample solar resources — and, it turns out, strong Republican support for solar, including for net metering. But the state’s major utility is threatening to do away with net metering. To keep solar strong and “stand up to utility monopolies,” Goldwater has started an organization called Tell Utilities Solar won’t be Killed (TUSK) — clearly Republican all the way to its elephantine name and logo.

And how does he frame his argument? It’s all about freedom of choice. Utilities, he claims, are trying to limit our freedom of choice — not just our choice of energy source but also our choice to save money. As he states on the organization’s website, “That’s not the conservative way and it’s not the American way.”

Also joining the cause are doctors in California, with the new organization Californians Against Utilities Stopping Clean Energy (CAUSE). Their website may not be as compelling as TUSK’s, but their angle is. Where TUSK focuses on choice, CAUSE puts the spotlight on public health. As co-Chair Dr. Deonza Thymes puts it, “More rooftop solar means cleaner air, and healthier communities. That’s something we can all stand behind.”

And this brings us to the larger picture. While even Vote Solar’s study showed only a small net financial benefit to California utilities and their customers, it didn’t include additional benefits that are harder to quantify — to taxpayers, the economy, and of course, the environment and public health. When you add those, net metering looks more and more like a net gain.