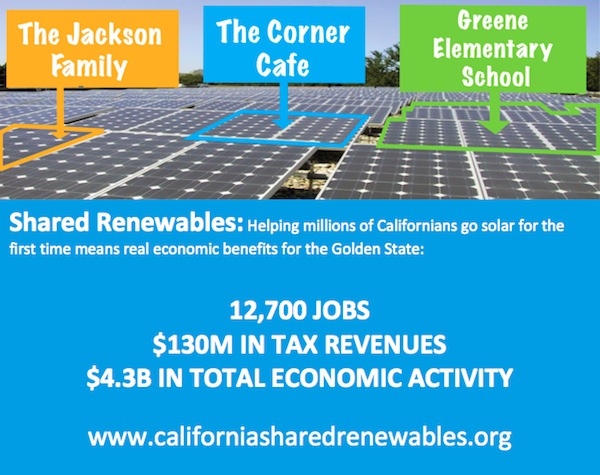 Earth Month ended well for shared renewables in California. A few weeks ago we reported on the two shared renewables bills making their way through the California legislature, SB 43 and AB 1014. And last week, both bills made it past their first hurdle: committee votes that were crucial to keeping the bills going.

The first of these was AB 1014, which passed through the California Assembly Utility and Commerce Committee on April 29 with a vote of 9 – 0. There was no opposing testimony. In fact, support for the bill was expressed not only by organizations like Vote Solar and the Solar Energy Industries Association but also the US Department of Defense and utilities Southern California Edison and PG&E.

According to Tom Price, California Shared Renewables Policy and Market Strategies Director, the bill was significantly amended. (For details, see this AB 1014 analysis.) But he says its progress is still “tremendously positive news. While it’s not the bill we started with, it does help us advance the goal of broadening access to renewable energy.”

The next day brought more good news: the California Senate Energy Committee voted 6 – 4 to pass SB 43. This bill got some pushback, as utilities and other groups raised concerns that it would shift costs to non-participants. Senator Lois Wolk, the bill’s sponsor, has committed to ensuring that doesn’t happen. So we can expect to see more changes made to this bill.

What’s next for the bills? They need to get through their respective Appropriations Committees and through full chambers, and then continue through the opposite chamber. At that point, the bills are expected to be combined into a single proposal. We’ll keep you posted on their progress.

While many details remain to be worked out, the passage of both AB 1014 and SB 43 through their first committees represents a major milestone. And their eventual passage would have even greater significance. According to a recent report by Vote Solar, a 1000 MW shared renewables program created by these bills would bring these benefits to California:

That doesn’t even include benefits like improved public health, increased security, and climate change mitigation.

And there’s yet another benefit. Where California goes, so does the rest of the country. We don’t have enough shared renewables laws in the US. Passing these bills would set a great example and help spread renewables beyond just California — to the majority of us throughout the country who can’t yet participate in generating clean power.